Given that my face is public property I often forget that other people don't like seeing their face staring back at them from the internet. Which is a bit of a shame, given just how you'll always find me with a camera at parties. 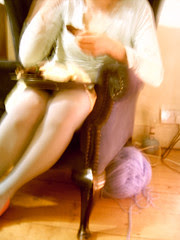 Usually, I feel quite confident about judging what the good pictures are, and what sort of level of privacy they need. The lovelies go to Flickr, for publicacious ultra-exposure to adoring masses of tag-surfers. Except for the ones featuring children/houses/other personal items, naturally, which are screened discreetly behind privacy features. When I'm just out to let someone who is inconveniently not in the same city leaf through a set of photos or pictures, Livejournal's scrapbook, for all its, uh, scrappiness, does the job rather well. The privacy features over there can lock a gallery tight to one other person, if you feel so inclined. And plenty never make it off the hard drive/photo shelf, because I just don't think that they look good, and by that I mean the photo, not the individual in it.

Consider this one: I love the balance between the eau de nil tights, and the lavender wool, and that tiny glimpse of the pink pink shoes. What I forget is that the subject might object to having her head cut off, might feel (against all evidence!) that her knees look odd, or that she just doesn't like being photographed.

Perhaps there's a sense that I've excerpted the photo from the individual, that it represents something removed from their identity.

Although it has to be said that every photograph of myself I find on flickr, whether recognisable or not, whether by me or not, I obsessively tag jeremy dennis.
Posted by cleanskies at 4:44 pm No comments: