The News Panel was on next, which was a bit off topic for me, but I was interested to hear their take on user generated content. Perhaps predictably, it was depressing: Martin Fewell revealing that 90-95% of their public emails come from the same small set of people, and in the email equivalent of green ink; Vicky Frost hinting at the abyssal awfulness of many of the comments coming into comment is free. There was, among the media professionals, an (I felt not altogether misplaced) mistrust of the "popular" news story, admixed with a appalled fascination with the awfulness of their most voluble audience members. Tory blogger was also on this panel, and his relationship with the awful, cringeworthy commentators was quite different. They are not populist sirens to mollify, improve, or ignore but his validatory bread and butter, the underswell of common opinion setting the media deliverers to rights, righteously. Also, notably, compere Nick Roddick asked him to sum up something (I honestly forget what) in two words. We were there for a while.

Oh, and Martin Fewell had a few words about the dangers of pandering to the Youtube generation (difficult, they agreed, to maintain integrity when their managers all want them to get onto the "most popular" and "most read" lists) and he used as his exemplar of popular non-news "videos of cats falling off pianos". I think he probably meant this one:

Cat's a genius.
Posted by cleanskies at 11:31 am No comments:

I sketched this one during the keynote speech and housekeeping. The keynote was from a prominent Tory blogger who gave a Powerpoint presentation (in blue, with lots of swooshes) mostly about what his blogging circle ("the most influential political bloggers in the country") do. He also described anyone over 40 as "by definition, a technological luddite" --- hmm, how old is Tim Berners Lee now? ... and ... I'll stop there.

His "abuse magnets" list was quite interesting, though -- these being the comment-guarantor topics, if he posts them on his blog, he gets fights in the comments section. Put it into perspective: during a later panel, someone lets slip that 90% of their comments are identifiably coming from just a few people.

The owl is sad because internet owl was previously unaware of the thriving Tory blogger scene. IB's a typical blogger because he's assuming truth by saying things loudly and with conviction. I catch myself doing the same from time to time.

The woman saying "people in black are your friends" is telling us what to do in event of a fire. She's one of the organisers.

The internet is an angel in fishnets because it just is.

Posted by cleanskies at 2:49 pm No comments:

I attended an event called Virtual Voices which looked to be helpful to the need to produce short videos, podcasts, etc. Here's the headline:

How can we develop young people's voices so they become the media literate content creators and storytellers of the future?

Virtual Voices brings the media industry together with young media makers and their teachers or tutors to attempt to answer this question and many others...

I guess, in this, I count as a "many other", being neither school-based nor in the media industry! But the line-up and workshops looked very relevant to the things I'm being asked for at the moment -- video, audio, and the chance to produce as well as consume media

It included workshops from Futurescape, PR Bristol and Radiowaves. All sounded interesting and useful.

I took notes in sketch form, as I usually do at events and meetings. For the next couple of posts, I'll be putting up my pages of notes, with relevant links and explanations. 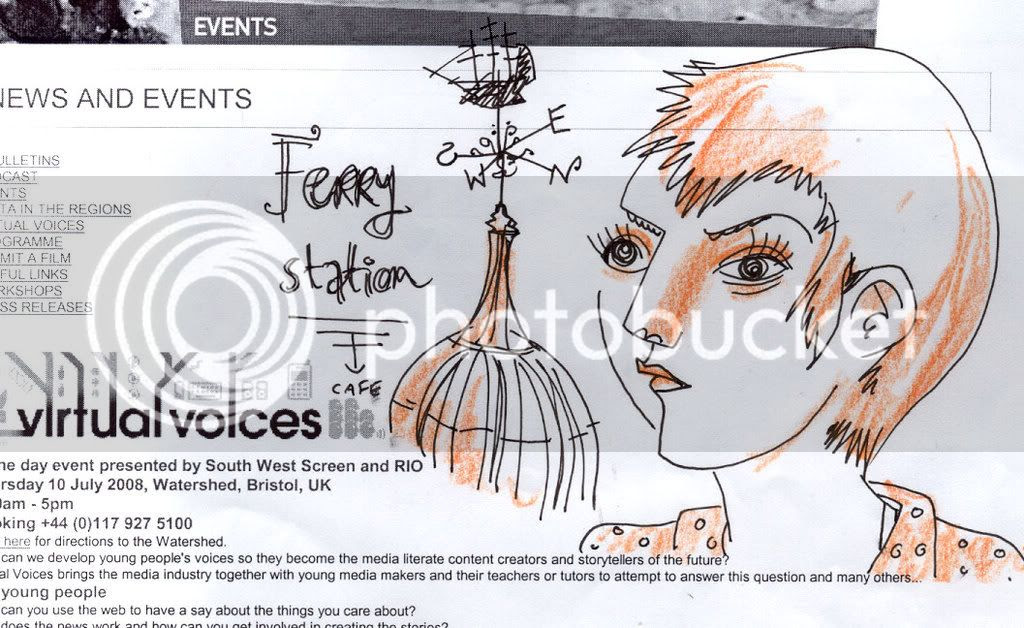 Nothing much to say about this one: I arrived in Bristol early and stopped off for a bacon butty at the lovely Ferry Station cafe. She was the one serving the coffee.
Posted by cleanskies at 10:45 am No comments: